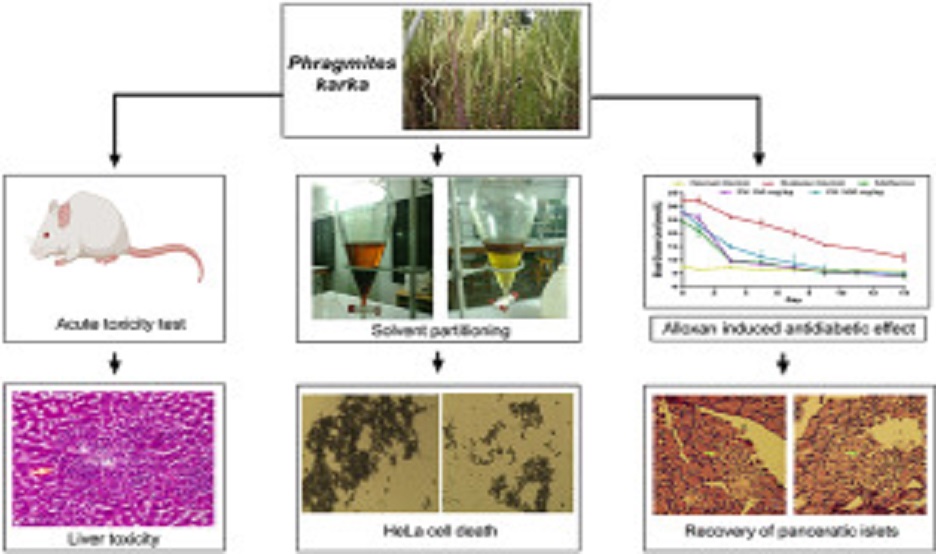 Phragmites karka (Retz.) of family Poaceae is a pristine tropical plant that is well known to the local healers for ailments of diabetes, fever, diarrhea and CNS depression but lacks the scientific evidence behind its traditional usage. Hence, we explicated this plant to find the scientific basis of its traditional utilization. The current study aims to find out the antidiabetic potential, toxicity after oral administration and in vitro cytotoxic activity of aerial parts of the plant on HeLa cells. The plant was extracted with methanol by maceration and the crude extract was then subjected to solvent partitioning with modified Kupchan method for preparing several fractions. Phytochemical screening and total phenolic content of the plant was first determined through established procedures. Acute toxicity of the plant was studied by orally administering a single high dose (5000 mg/kg) of drug. Cytotoxicity of the methanolic plant extract was determined by measuring the percentage of cell viability on human cervical cancer cell lines, HeLa. In vitro antidiabetic activity was determined through iodine starch and DNSA (3,5-dinitrosalicylic acid) method of α-amylase inhibition. Finally, in vivo oral glucose tolerance test and alloxan induced antidiabetic activity test was performed at 150 and 300 mg/kg body weight doses of plant extract to confirm the in vivo antidiabetic activity. No mortality was demonstrated by Phragmites karka in the acute toxicity test. However, signs of cellular toxicity was observed and histopathological studies on major organs exhibited necrosis in liver and kidney. In vitro cytotoxicity assay revealed the death of HeLa cells by DCM (dichloromethane) and n-hexane fractions of plant extract at 100 and 10 μg/mL concentrations. The IC50 value of the fractions were later evaluated by MTT assay (316.1 and 96.7 μg/mL for n-hexane and DCM fractions, respectively). In the iodine starch and DNSA method of α-amylase enzyme inhibitory activity test, substantial inhibition of enzyme was observed with the IC50 values of 2.05 and 2.08 mg/mL, respectively. In the in vivo antidiabetic activity test, considerable reduction in blood glucose level of diabetic mice was detected in both oral glucose tolerance test and alloxan induced antidiabetic activity test. In addition, the microscopic examination of pancreas showed noticeable recovery of pancreatic β cells and the blood lipid profile analysis represented a significant (p < 0.05) reduction of total cholesterol, LDL (low density lipoprotein) and triglyceride level in plant extract treated mice. Results of this study reveals that the Phragmites karka extract is toxic at cellular level after oral administration and cytotoxic when tested on HeLa cells. The plant also evidenced hypoglycemic property, possibly through the inhibition of α-amylase enzyme and recovered the pancreatic beta cells along with the improvement of lipid profile of diabetic mice. However, robust studies on this plant is required to isolate the bioactive compounds, elucidate structures and evaluate their mechanism of actions in support of our findings.