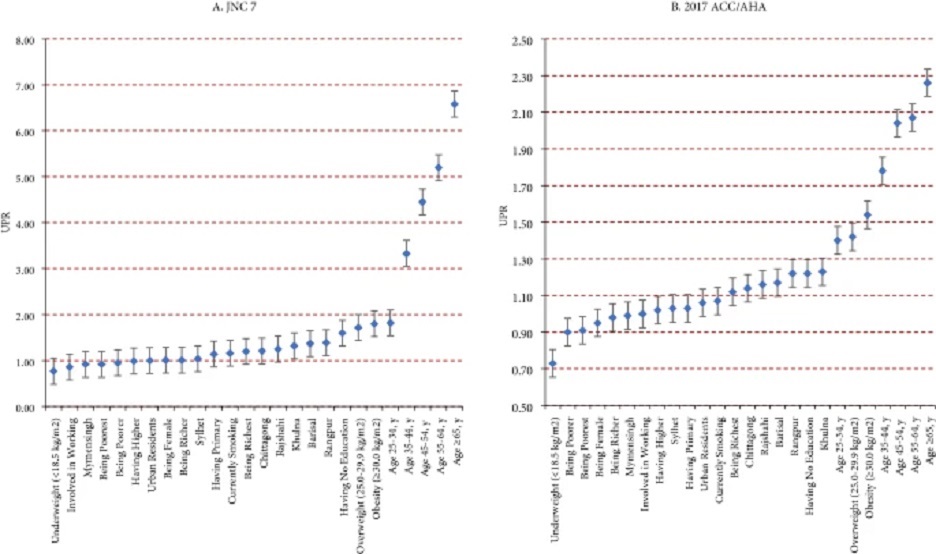 Prevalence of and factors associated with hypertension according to JNC 7 and ACC/AHA 2017 guidelines in Bangladesh.

Most studies either followed Joint National Committee 7 (JNC 7) or World Health Organization-International Society of Hypertension (WHO-ISH) guidelines to ascertain the prevalence of hypertension among Bangladeshi adults. The American College of Cardiology/American Heart Association (ACC/AHA) revised the definition of hypertension in 2017, which has significant public health importance. In Bangladesh, the new guideline has resulted changes in prevalence and risk factors for hypertension compared to the JNC7 guideline. This study used data from the most recent round (2017–2018) of the Bangladesh Demographic and Health Survey (BDHS). According to the 2017 ACC/AHA guideline, the participants were categorized as hypertensive if they had blood pressure (BP) ≥ 130/80 mmHg, but it was ≥ 140/90 mmHg in JNC 7 guideline. A total of 11,959 participants were involved in the analysis. The median (IQR) age of the respondents was 34.0 (18.0–95.0) years. The prevalence of hypertension was 24.0% according to the JNC 7 guideline, which was 50.5% according to the 2017 ACC/AHA guideline. Participants who were overweight and obese, aged, member of affluent households, Rangpur and Rajshahi division inhabitants had significantly higher odds of being hypertensive according to both guidelines. The new guideline suggests that half of the adult population in Bangladesh is hypertensive when measured according to the new guideline, urging the policymakers and public health practitioners to take immediate action to address the already established modifiable risk factors.