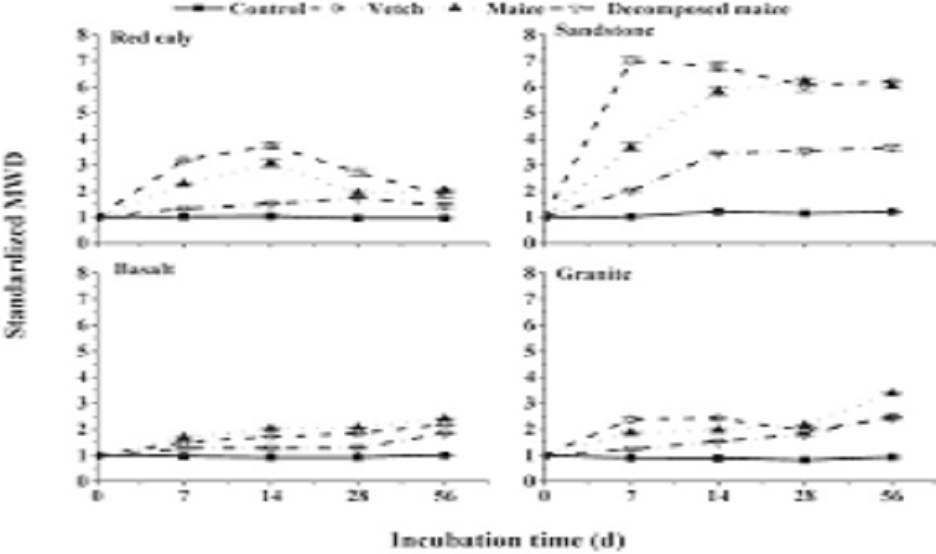 Rare earth oxides (REOs) as tracers track aggregate formation and breakdown pathways. However, investigations on the impacts of residue quality and soil texture on aggregation pathways are lacking. In this study, easily, moderately and slowly decomposable residues with different qualities (milk vetch, C/N = 16.7; maize, C/N = 35.5; and decomposed maize, C/N = 30.8) were applied to four types of red soils (Red clay, Basalt, Sandstone and Granite) with a range of soil textures. Aggregate fractions of each soil were labelled by different REOs. The soil respiration (CO2), mean weight diameter (MWD) and REOs concentrations were measured after 0, 7, 14, 28 and 56 days of incubation. The results showed that except for Basalt soil, the incorporation of organic residues increased the formation but decreased the breakdown of macroaggregates in the order of milk vetch > maize > decomposed maize in the first two weeks, thus leading to a greater standardized MWD in higher-quality residue-incorporated soils. In the mid-to-late incubation time (28–56 d), the standardized MWD and relative formation of macroaggregates in the milk vetch and maize treatments converged regardless of soil types. An exponential relation between the standardized MWD and accumulated CO2 (P < 0.05) indicated that the residue quality-dependent MWD dynamics were further driven by microbial activity. The two coarse-textured soils (Sandstone and Granite) presented a more rapid response of aggregation to microbial activity than the two fine-textured soils (Red clay and Basalt) did. The relative formation of 2–5 mm aggregates was significantly greater in Sandstone soil at a given residue incorporation, thus leading to a faster increase in the standardized MWD compared with fine-textured soils. However, a similar result was not observed in Granite soil. A positive linear relationship between the standardized MWD and 2–5 mm aggregate formation in all investigated soils (P < 0.001) suggested that MWD dynamics mainly depended on the newly formed large macroaggregate rate. Our study demonstrates that the dynamics of soil aggregation are closely related to microbial activity and newly formed macroaggregates, beyond the impacts of residue quality and soil texture on soil aggregation.