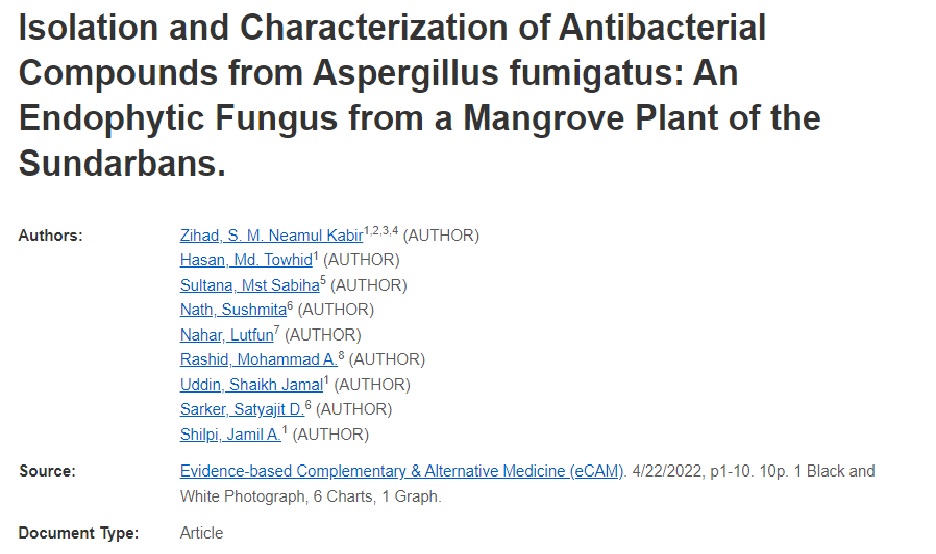 Isolation and Characterization of Antibacterial Compounds from Aspergillus fumigatus: An Endophytic Fungus from a Mangrove Plant of the Sundarbans.

The Sundarbans, a UNESCO world heritage site, is one of the largest mangrove forests in one stretch. Mangrove plants from this forest are little studied for their endophytic fungi. In this study, we isolated fourteen endophytic fungi from the plants Ceriops decandra and Avicennia officinalis collected from the Sundarbans. Five of them were identified as Aspergillus sp. and one as Penicillium sp. by macroscopic and microscopic observation. Antibacterial activity of the crude extracts obtained from these endophytes was determined against Staphylococcus aureus, Micrococcus luteus, Escherichia coli, and Pseudomonas aeruginosa using resazurin-based microtiter assay. The isolated endophytes showed varying degrees of antibacterial activity with MICs ranging between 5 and 0.078 mg/mL. Molecular identification of the most active endophyte revealed its identity as Aspergillus fumigatus obtained from the leaves of C. decandra. Acute toxicity study of the ethyl acetate extract of A. fumigatus in mice revealed no mortality even at the highest dose of 2000 mg/kg bodyweight, though some opposing results are found in the subacute toxicity study. The extract was subjected to silica gel and Sephadex column chromatography resulting in the isolation of three pure compounds. LC-MS analysis of these pure compounds revealed their identity as fumigaclavine C, azaspirofuran B, and fraxetin. This is the first report of fraxetin from A. fumigatus. All three identified compounds were previously reported for their antibacterial activity against different strains of both Gram-positive and Gram-negative bacteria. Therefore, the observed antibacterial activity of the ethyl acetate (EtOAc) extract of A. fumigatus could be due to the presence of these compounds. These results support the notion of investigating fungal endophytes from the Sundarbans for new antimicrobial compounds.