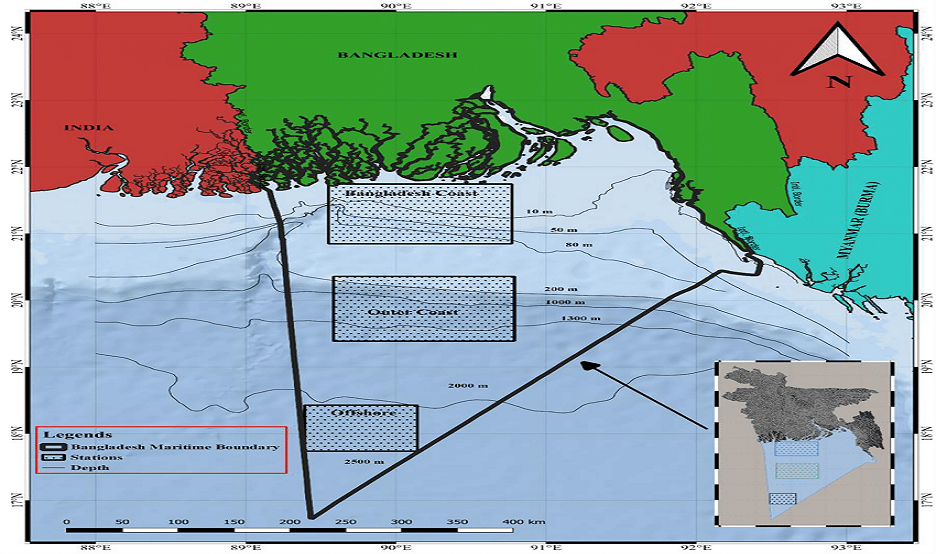 Daytime and Nighttime Sea Surface Temperature (SST) along with Diurnal Variability (D-SST) in the Northern Bay of Bengal: A Remote Sensing Approach

This study examined daytime and nighttime sea surface temperature (SST) and its diurnal variability (D-SST) in three regions of the northern Bay of Bengal (BoB) during 2000–2019 by using MODIS Terra satellite data. An increasing trend of SST was observed in the Bangladesh coast, outer coast, and offshore. The trend was ranged around 0.10–0.16 °C per decade during daytime and 0.18–0.27 °C per decade during nighttime. The increased SST in the study area may be attributed due to rapid industrialization and global warming. Monthly SST represented four successive phases, such as warming-cooling and warming-cooling, which started in February. Month wise SST concentrations varied from 29.74 °C to 23.32 °C during nighttime and 29.613 °C to 23.446 °C during daytime in the northern BoB. The comparative SST among three different stations showed that annual offshore SST was higher during daytime and lower during nighttime than the outer & Bangladesh coast. Annual daytime maximum and minimum SST were observed at 28.45 °C and 27.27 °C, respectively. During the nighttime, it was ranged from 28.33 °C to 27.05 °C. The presence of nearby landmass may be the factor behind the variation of SST during day and nighttime. About 65–80% of monthly D-SST and 70–80% of annual D-SST value was recorded below 0.3 °C in our study area. A significantly (p < 0.001) moderate correlation (r = 0.54) was found between the MODIS Terra satellite data and NODC in-situ data.