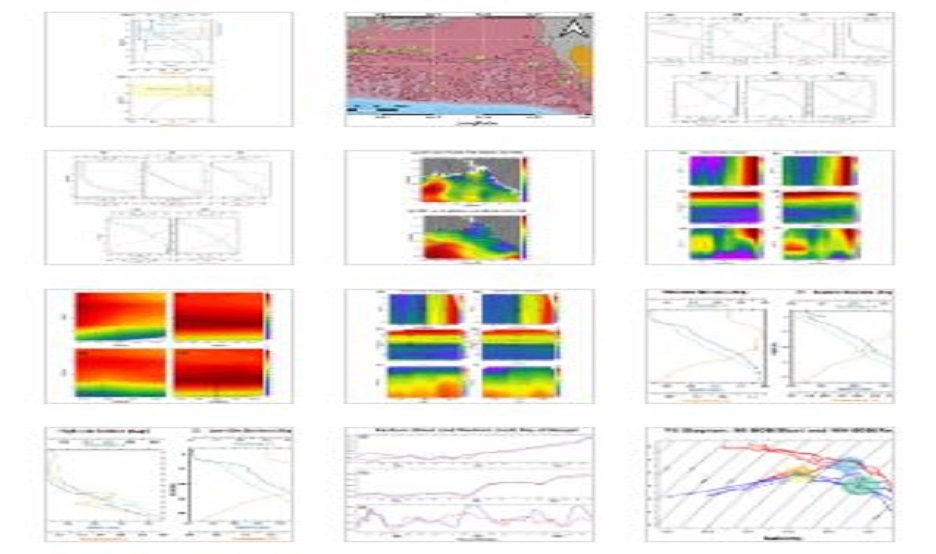 The thermal inversion (TI) is an interesting feature of the global ocean that plays a significant role in ocean-atmospheric process. This study addressed the spatial variability of the TI in the northern Bay of Bengal (NBoB) associated with mixed layer depth (MLD), isothermal layer depth (ILD), barrier layer thickness (BLT), and water mass formation in the winter season. Temperature, salinity, and density measurements were obtained via Conductivity, Temperature, Depth (CTD) casts from 12 different stations. The stations were divided into two regions: the north-western BoB (NW-BoB, 89.5°E: 90.5°E; 21.1°N to 21.6°N), and the north-eastern BoB (NE-BoB, 91°E to 92.1°E; 20.5°N to 21.2°N). Average profiles of the NW-BoB had deeper mixed layer (MLD of 10.30 m) and isothermal layer (ILD of 8.40 m) than profiles in the NE-BoB. The barrier layer in the NW-BoB was also thicker (2.79 m) than in the NE-BoB (1.05 m). One possible reason for these differences is the massive freshwater influx in the NW-BoB, as freshwater reduces salinity (27 PSU in the NW-BoB versus 35 PSU in the NE-BoB) and results in shallower MLD and ILD. Spatially organized TIs occurred in both the NE-BoB and NW-BoB during winter (January–February). Two distinct TI layers at 5 m and 28 m depth were visible in the NE-BoB to the formation of two water masses, the Bay of Bengal Low Salinity Water Mass and the Preparis Channel Water Mass. The NW-BoB featured only one TI layer at 8 m (with a inversion temperature of 0.58 °C), which was associated with the formation of one distinct water mass, the Bay of Bengal Intermediate Water Mass. Spatial variability of the TIs is a function of freshwater flux and surface cooling in the NBoB. More detailed investigation is needed to further understand the TIs and in the NBoB.