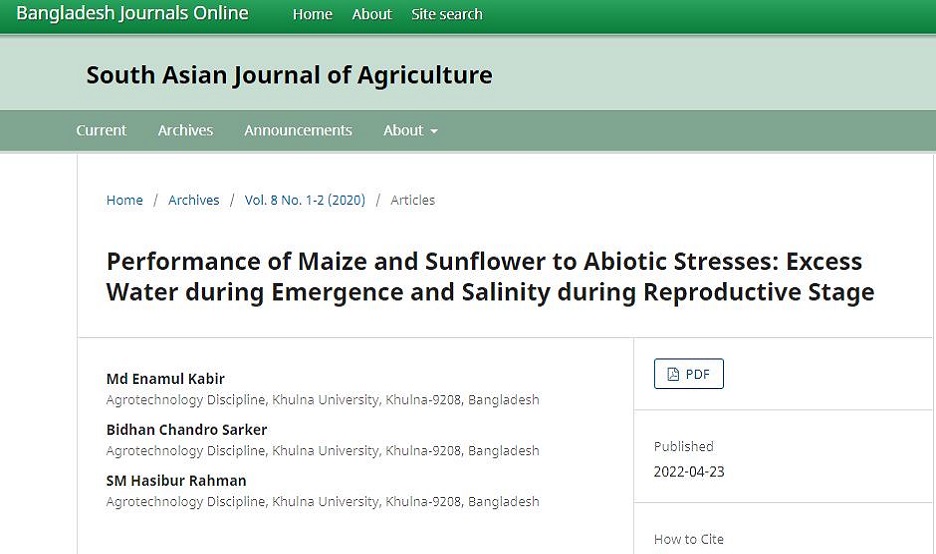 Performance of Maize and Sunflower to Abiotic Stresses: Excess Water during Emergence and Salinity during Reproductive Stage

Excess of wetness and salinity in soil are the two major constraints of cropping during the winter season in southwestern (SW) Bangladesh. Seed sowing and crop establishment in the saturated soil might utilize the soil profile water (non-saline) in the early stage of growth and irrigation with natural canal water (low salinity) may open up opportunities of cropping in the winter season. The current pot study (two separate experiments) was conducted with sunflower and maize by sowing seeds in excessively wet field soil (collected, soil moisture was more than field capacity, 42% v/v) in small pots for their performance of emergence to evaluate grain yield. After emergence in small pots, the plants were transferred to large pots and allowed to grow till maturity. The source of irrigation water with cumulative electrical conductivity (EC) was the treatment as fresh water, canal water or NaCl solution. The strength (dS m-1) of NaCl solution was made equal to that of canal water during each of the irrigation. The number of irrigation was four and the ECs were 3.2, 3.9, 4.6 and 5.4 dS m-1 on 30 January, 15 and 28 February, and 15 March, respectively. In both crops, all irrigations were completed by 74 days after sowing (DAS) and the plants were harvested at 75 DAS for dry matter (DM) measurement and 110 DAS for DM, yield and yield attributes. The emergence of seeds decreased significantly when seeds were sown in wet soil which caused the closing of seed-holes from the surface of wet soil. Decreased grain yield recorded for both of the crops (28% in sunflower and 40% in maize compared to that by freshwater irrigation) due to irrigation by canal water or NaCl solution. The yield and yield attributes were numerically lower in NaCl solution irrigation in both of the crops though the ECs of both canal water and NaCl solution maintained as same. The crops established successfully in excessive wet soil, but the yield loss was due to irrigation water salinity (irrespective of source). The yield loss would have been decreased if the crops were sown early (in late December or early January instead of early February in the current study) and completing the irrigations by February. The findings of the current study suggest that sunflower and maize might be grown in the field by using the canal water as a potential irrigation source in the SW Bangladesh.