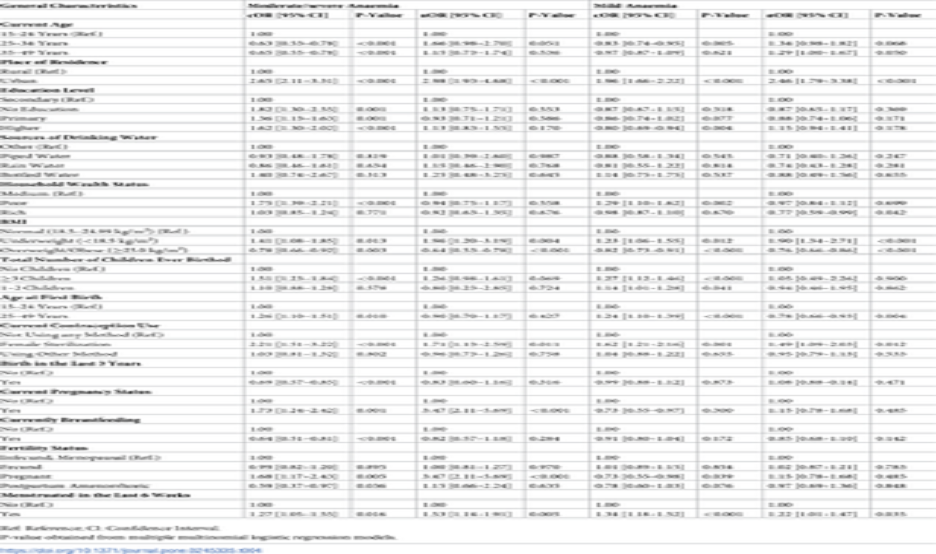 Prevalence of and factors associated with anaemia in women of reproductive age in Bangladesh, Maldives and Nepal: Evidence from nationally-representative survey data

Anaemia is a significant public health problem in most South-Asian countries, causing increased maternal and child mortality and morbidity. This study aimed to estimate the prevalence of and factors associated with anaemia in women of reproductive age in Bangladesh, Maldives, and Nepal. We used the nationally-representative Demographic and Health Surveys Program data collected from women of reproductive age (15–49 years) in 2011 in Bangladesh (n = 5678), 2016 in Maldives (n = 6837), and 2016 in Nepal (n = 6419). Anaemia was categorized as mild (haemoglobin [Hb] of 10.0–10.9 g/dL for pregnant women and 11.0–11.9 g/dL for non-pregnant women), moderate (Hb of 7.0–9.9 g/dL for pregnant women and 8.0–10.9 g/dL for non-pregnant women), and severe (Hb <7.0 g/dL for pregnant women and <8.0 g/dL for non-pregnant women). Multinomial logistic regression analyses were used to identify factors associated with anaemia. The prevalence of anaemia was 41.8% in Bangladesh, 58.5% in Maldives, and 40.6% in Nepal. In Bangladesh, postpartum amenorrhoeic, non-educated, and pregnant women were more likely to have moderate/severe anaemia compared to women who were menopausal, had secondary education, and were not pregnant, respectively. In Maldives, residence in urban areas, underweight, having undergone female sterilization, current pregnancy, and menstruation in the last six weeks were associated with increased odds of moderate/severe anaemia. In Nepal, factors associated with increased odds of moderate/severe anaemia were having undergone female sterilization and current pregnancy. Anaemia remains a significant public health issue among 15-49-year-old women in Bangladesh, Maldives, and Nepal, which requires urgent attention. Effective policies and programmes for the control and prevention of anaemia should take into account the unique factors associated with anaemia identified in each country. In all three countries, strategies for the prevention and control of anaemia should particularly focus on women who are pregnant, underweight, or have undergone sterilization.