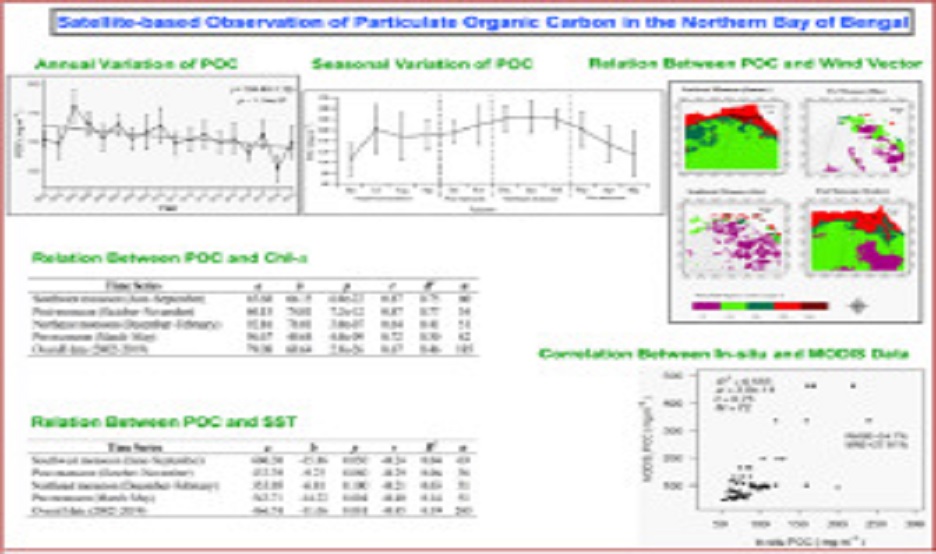 Particulate organic carbon (POC) plays a vital role in the ocean carbon cycle and is related to many important ocean biogeochemical processes. This study investigates the annual and seasonal variability of POC and its relationship with sea surface temperature (SST), chlorophyll-a (Chl-a), and wind vector in the northern Bay of Bengal (BoB) of Bangladesh and validates satellite data with in situ measurement data. Moderate Resolution Imaging Spectroradiometer (MODIS) Aqua satellite level-3 data of POC, Chl-a, and SST were used in this study. Wind vector data were obtained from WindSat Polarimetric Radiometer satellite. Annual average of 18-year (2002–2019) surface POC concentration in the northern BoB ranged from 126.83 mg m−3 to 180.58 mg m−3 (average of 153.84±11.17 mg m−3) with a declining rate of -1.12 mg m−3 year−1. The POC was highest (181.80±22.34 mg m−³) during the northeast-monsoon (December–February) and lowest (136.56±36.24 mg m−³) in the pre-monsoon (March-May). Statistically significant (F3,202 =18.09; p<0.05) difference of POC was found amongst the seasons. A very weak inverse relationship was observed between the SST and POC seasonally and annually, whereas POC and Chl-a showed a strong positive relation in the northern BoB. POC was observed to be very prominent with northeasterly wind in northeast and post-monsoon and low with southwesterly wind in southwest and pre-monsoon. POC variability was influenced mainly by Chl-a, followed by SST and wind speed for BoB. The POC:Chl-a ratio in the northern BoB were ranged from 240.91 to 294.68, which shows a strong influence of biological processes on POC composition. Additional mechanisms responsible for the seasonal POC variability are also addressed in this study. A significantly (p<0.001) moderate correlation (r=0.75) was found between the MODIS Aqua satellite data and in situ observation. Further detailed investigation is needed to observe the role of POC variability in biogeochemical processes of the northern BoB.