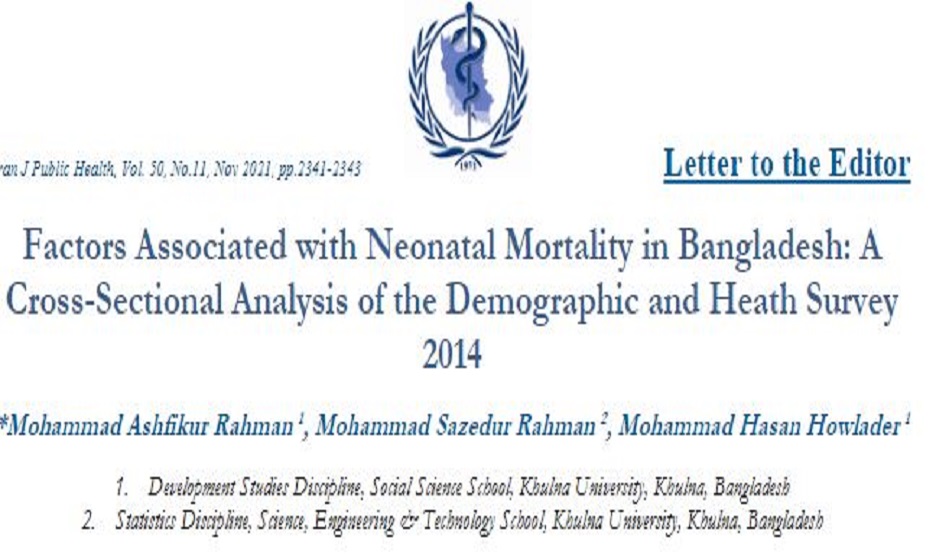 Factors Associated with Neonatal Mortality in Bangladesh: A Cross-Sectional Analysis of the Demographic and Heath Survey 2014

Infant and child mortality rate indicates a country’s overall socio-economic and standard of living. Although, recent past Bangladesh achieved commendable success in reducing child and maternal mortality. Nevertheless, the prevalence rate of neonatal mortality dares to questions against the inserted health policy and nutritional programs. Beyond clinical causes, socio-biological causes of neonatal mortality deserve to be ascertained. After getting a baby born the neonatal period begins and ends with terminating 28 days of life (1). Associated factros of child mortality have been comprehsensivley examined in the demoraphic and epidemiological researches (2) and it is possible to draw an important conclusion that the child mortality has been droping down in developing country. This had happened due to take intensive efforts like immunization, oral rehydration, vitamin A dose campaings and so on. However, globally according to WHO 5.4 million under-five child died in 2017 whereas 2.5 million of those children died within first month (3). Child mortality as well as Under-five mortality rate (U5MR) remains an urgent concern particularly in developing countries like Bangladesh (4,5) although there is a declining trend has found in the WHO data of under-five, infant and neonatal mortality rate (3). However, the truth is, the reduction of neonatal mortality rate (NMR) is slower than the other two types between the year 1990 and 2017 (3,4). Whereas, in 2015, approximately 5.9 million under-five (U5) children were died while 2.7 million (45%) of these babies died in their neonatal period (3,4,6).