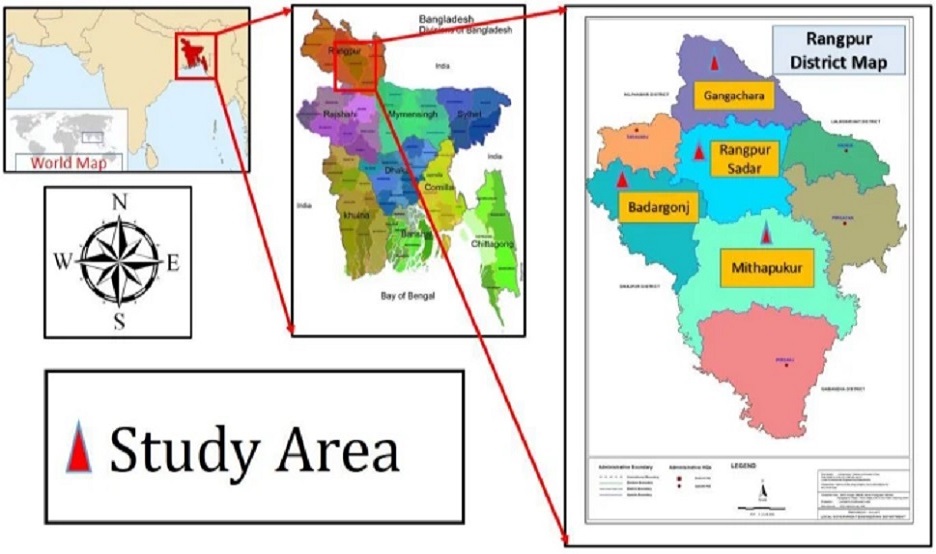 The plant tobacco is cultivated natively in North and South America. The scientific name of the tobacco plant is Nicotiana tabacum or less widely used Nicotianna rustica [1]. During the “1980s” and “1990s”, the tobacco industry started trading heavily in out of the USA specifically Asia’s developing countries. Since the mid-1960s of the last century, tobacco has been introduced into the Bangladeshi fields where food crops were grown. It elongated more widely after liberation in 1971 by the British American Tobacco Company in Teesta silt in the Rangpur area [2]. Rangpur is a district that is situated in the northern part of the country. Agricultural soils of Rangpur are very fertile and rice-based. According to the Bangladesh Agricultural Research Council (BARC) [3], here major cropping patterns are Potato/Wheat-T.Aus (HYV)-T.Aman (HYV), Wheat-Jute-T.Aman (HYV), Boro-Fallow-T.Aman. Most renowned rice varieties are grown in boro season where tobacco is being cultivated by replacing boro seasonal rice. Bangladesh is one of the greatest tobaccos uptaking countries in the world. Totally, 0.5% of people are directly related to tobacco cultivation to their employment. Tobacco is grown throughout the country, with the largest tobacco cultivating areas including Rangpur, Kushtia, and Chattogram Hill [4]. The total cropped area in the Rangpur region is 696,420 ha, whereas 14,221 ha lands are now being tobacco cultivated [3]. Traditionally, the area is one of the most tobacco-growing areas in the country that is why the Rangpur district was chosen as the study area. Tobacco is an alien species in this area, and this non-local species adversely impacts on the habitats and bioregions environmentally or ecologically. They crumble up an agro-ecological system by forcing over other cultivated and uncultivated crops essential for the life and livelihood of a community [5]. Tobacco cultivation greatly influences the environment, such as deforestation, environmental pollution due to the utilization of agrochemicals and soil fertility inanition. Tobacco plants take soil nutrients more heavily and consume soil nutrients very fast compared to other crops, thereby making such soils unsuitable for healthy plant growth for the following crops [6]. Therefore, tobacco plants require more chemical fertilizers and pesticides thus lead to potential loss of soil health [7]. The excess use of agrochemicals such as insecticides and herbicides is another factor that contributes a lot to the accumulation of heavy metals in the soil [8]. Tobacco farming contributes to large accumulation of heavy metals in soils especially Pb and Cd that has a carcinogenic effects on human body [9]. Apart from that, heavy metals in soil harms soil quality. Especially soil microbial community is strongly suppressed due to the destruction of soil enzymatic activities [10]. So, a comparative research was conducted at tobacco-growing fields and seasonal crops growing field (noted as a non-tobacco field) in Rangpur district to assess the impact of tobacco cultivation on soil health as well as analyze the ecological risk of heavy metals based on two successive years soil physicochemical and heavy metals loading data.